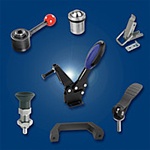 Most popular in the United States and Canada, inch fasteners follow a naming convention that lists diameter, number of threads per inch, and length in terms of inches. Ironically, these fasteners are generally expressed as whole numbers for smaller sizes and as fractions for larger sizes.