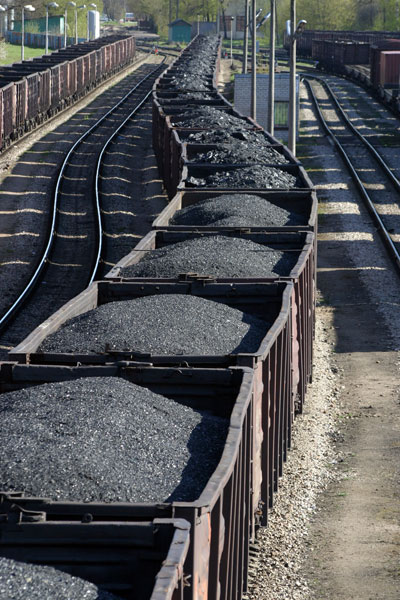 Coal (from the Old English term col, which has meant "mineral of fossilized carbon" since the 13th century) is a combustible black or brownish-black sedimentary rock usually occurring in rock strata in layers or veins called coal beds or coal seams. The harder forms, such as anthracite coal, can be regarded as metamorphic rock because of later exposure to elevated temperature and pressure. Coal is composed primarily of carbon along with variable quantities of other elements, chiefly hydrogen, sulfur, oxygen, and nitrogen.

Throughout history, coal has been a useful resource. It is primarily burned for the production of electricity and/or heat, and is also used for industrial purposes, such as refining metals. A fossil fuel, coal forms when dead plant matter is converted into peat, which in turn is converted into lignite, then sub-bituminous coal, after that bituminous coal, and lastly anthracite. This involves biological and geological processes that take place over a long period.

Coal is the largest source of energy for the generation of electricity worldwide, as well as one of the largest worldwide anthropogenic sources of carbon dioxide releases. In 1999 world gross carbon dioxide emissions from coal usage were 8,666 million tonnes of carbon dioxide.Coal-fired electric power generation emits around 2,000 pounds of carbon dioxide for every megawatt-hour generated, which is almost double the approximately 1100 pounds of carbon dioxide released by a natural gas-fired electric plant per megawatt-hour generated. Because of this higher carbon efficiency of natural gas generation, as the fuel mix in the United States has changed to reduce coal and increase natural gas generation, carbon dioxide emissions have fallen.Coal is extracted from the ground by coal mining, either underground by shaft mining, or at ground level by open pit mining extraction. Since 1983 the world top coal producer is China, in 2011 China produced 3,520 millions of tonnes of coal – 49.5% of 7,695 millions tonnes world coal production. In 2011 other large producers were United States (993 millions tonnes), India (589), European Union (576) and Australia (416).[5] In 2010 largest exporters were Australia with 328 million tonnes (27.1% of world coal export) and Indonesia with 316 millions tonnes (26.1%), while largest importers were Japan with 207 million tonnes (17.5% of world coal import), China with 195 million tonnes (16.6%) and South Korea with 126 million tonnes (10.7%).