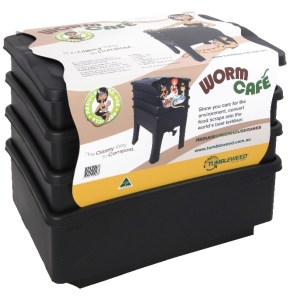 The ultimate worm farm for indoor or outdoor use. With a sleek new design and clever features, the Worm Café® turns organic waste into rich worm castings and worm tea with no mess. You’ll find your Worm Café® is easy to use in every way – a hinged lid helps you open and fill your worm farm while a sloping base on the collector tray assists the worm tea to drain easily from the drip free tap. The entire unit has been designed to prevent brown tea from running down the worm farm legs to stain your floor or tiles. Three working trays, all of which are side ventilated, maximize the Worm Café’s® environmental stability, and keep air flowing without allowing rain to fill the farm and drown your worms. Cross ventilation also helps to prevent worm tea from turning anaerobic. The Worm Café® has been designed with mounds on collector trays and a fly proof lid to encourage worms to continuously move up through the trays in search of fresh organic waste. Modern legs with ant caps and a fly proof lid help prevent ants from climbing and insects from getting into your Worm Cafe®. For absolute convenience, instructions are engraved under the lid of the Worm Café®. 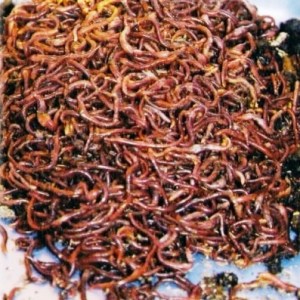 With over 4, 000 species of earthworms, only 3 are considered FRESH GARBAGE Composting Worms. Eisenia foetida “Composting Red Wiggler” Excavatus “Composting Blue” Rubellus “Composting Tiger or Yellow Tail” When you purchase from Our Vital Earth, you recieve Eisenia foetida and Rubellus. Our Finest Fresh Garbage Composting Worms have been found capable of transforming huge quantities of fresh garbage into something very valuable. The “Composting Red Wiggler” is more familiar to us here in the United States. They have a very big appetite and can eat 1 to 1 ½ times their weight every day. The other two process at different levels giving us superior worm castings and tea. These composting worm’s excretions, known as castings and the washing of the worm, urine, known as worm tea, contain plant growth regulators and other substances. This produces nature’s most remarkable natural form of plant care, instead of using chemical fertilizers, insecticides, and fungicides.