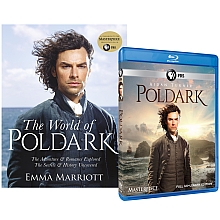 Masterpiece:Poldark (U.K. Edition) It's 1783, and Ross Poldark has returned home from the American Revolutionary War to find England in the grip of recession and his beloved Cornwall on its knees. His father is dead, his family's land and copper mines are in ruins, and his childhood sweetheart is about to marry his first cousin. Feeling betrayed by everything he loves, Ross must rebuild his life, embarking on a risky business venture, facing new adversaries, and finding love where he least expects it. Based on the novels by Winston Graham and set against the dramatic Cornish coastline, this striking saga stars Aidan Turner (The Hobbit) as Ross Poldark, Eleanor Tomlinson (Death Comes to Pemberley) as the fiery Demelza, and includes a special appearance by Robin Ellis, who played the original Ross Poldark in the 1970s. Over 60 minutes of special features, including... - Interviews with main cast, directors, writer & producer - Episode 1 audio commentary - Poldark: The Man, The Icon - The Making Of Poldark - The Women Behind the Man This Blu-ray features subtitles in English Amid the turmoil of eighteenth-century Cornwall, Ross comes back to a home in ruins, his father dead and his childhood sweetheart engaged to another - his own heart as battered as the country around him. Experience the great houses and the glorious landscapes and follow the cast of characters as their stories play out against the backdrop of Cornwall's wild beauty, through interviews with the actors, behind the scenes insights and in-depth information on costumes, props and locations. Packed full of behind the scenes photographs, The World of Poldark is the ultimate guide to the popular series. Emma Marriot is a writer and editor, and author of several popular history books, including the bestselling series Used to Know That: History and The History of the World in Bite-Sized Chunks. As a former in-house senior editor at Macmillan UK, she also has extensive experience editing a wide range of television and film tie-in books. Emma lives in Bedfordshire, England with her husband and three children. Hardcover, 224 pages