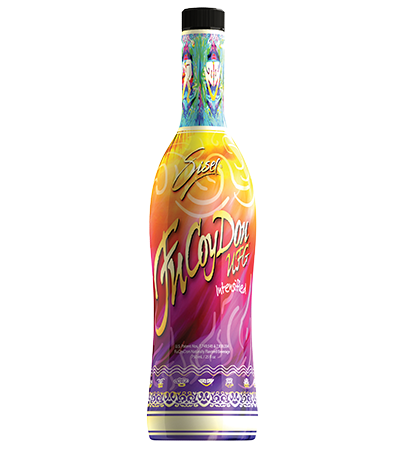 After building one of the most successful MLM businesses in the world, Tom Mower started over and created an entirely new company. Using years of business experience and the financial rewards of his previous success, Tom decided to build an even more spectacular enterprise, SISEL International. This was to be no ordinary MLM company. Tom needed an outlet to blend his knowledge of cutting-edge science with traditional wisdom. What ancient food was so spectacular that it inspired the launch of SISEL International; a plant so compelling that it caught the attention of Tom Mower? Tom was so intrigued by this product that he was willing to spend whatever it took to bring it to public awareness. This remarkable remedy, that had such a profound influence on Tom, was the extraordinary sea vegetable, limu moui. Limu Moui is a power-packed sea vegetable that has been eaten for thousands of years in Tonga, Japan, and other coastal areas. Because the nutritive value is great, these remarkable plants were used to regenerate and increase well-being. In many cases, science is supporting some of the traditional uses of limu moui. Research on this remarkable sea plant directed Tom to two places in the world – Okinawa, Japan and Tonga. Those who regularly include this food in their diets enjoy sustained levels of health. 1 In this era of increased health concerns, often related to poor nutrition, it makes sense to turn to the bounty of the sea. In Okinawa, Japan, limu is called mozuku. There, seaweed is harvested from their own coastal waters. However, to supply Japan’s huge demand, Tongan limu is also valued. The Japanese people understand the extraordinary therapeutic value of Tongan seaweed. They know that limu moui grows abundantly in Tonga’s perfect climate and in some of the most pristine waters in the world. Investigation shows that limu moui contains significant concentrations of the active component, fucoidan. Fucoidan is a complex polysaccharide (sugar) and is the subject of over 700 scientific studies listed in the National Library of Medicine’s PubMed database. 2 These and other studies reveal the amazing regenerative properties of fucoidan that affect nearly every system of the body. Fucoidan research is catching worldwide attention. Articles on fucoidan’s miraculous benefits are appearing in authoritative medical journals. Science sees promise for fucoidan as a powerful support to the immune system. 3 Fucoidan also enhances normal cell growth and division. 4 Reports indicate that fucoidan supports normal liver 5 and circulatory function. 6 Seaweed experts believe that having a daily dose of seaweed sustains healthy body functions. 7 People who eat fucoidan-rich limu moui on a regular basis report sustained energy* and feel support to the digestive system and as an aid to help support normal, pancreatic function. Many also report smooth, soft skin*. Some even believe that limu imparts beauty to those who eat it, which in turn creates a happier existence. But limu moui is not the end of the story. To make an exceptional plant even more powerful, Tom created a patent-pending process designed to intensify SISEL limu moui. The results are remarkable. SISEL’s product is unlike any other seaweed beverage in the industry. This unique intensification procedure differentiates this amazing sea beverage called FuCoyDon TM. You will love SISEL’s FuCoyDon – a tasty power-pack of supportive nutrients found only in the sea. This powerful drink provides the regenerative benefits of an amazing, traditional food that is combined with cutting-edge technology. This flagship product, in time, will become a common name in every healthy household. Enjoy the beverage that launched the most successful company in the MLM industry. FuCoyDon – the tasty answer to your vital, daily dose of seaweed. 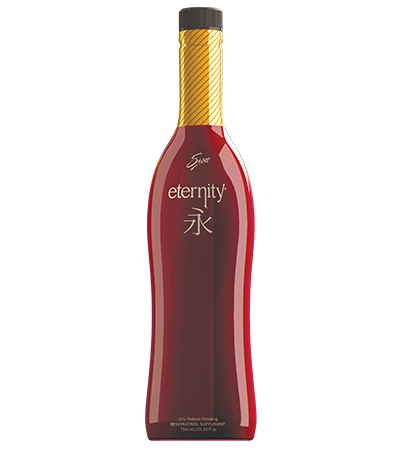 An intensely concentrated, synergistic blend of resveratrol and three essential key ingredients in a variety of macro- and nano-sized nutrients for amplified bioavailability and vitality. This life-enhancing, highly potent liquid supplement may be the most significant factor ever discovered in the history of human health for promoting youthful vitality. Activates age-slowing gene Helps repair and protect DNA Promotes proper cellular replication Supports good health and longevity A patent-pending blend of resveratrol, antioxidants, and energy promoting ingredients 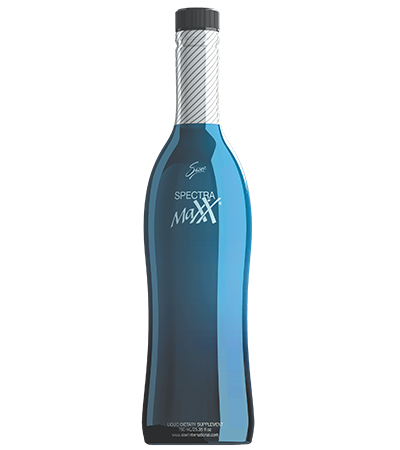 SpectraMaxx fills in the gaps found in our modern diets by providing the broadest spectrum of antioxidants and trace minerals ever contained in a single supplement. By combing the incredible ingredients of Spectra AO and SupraMaxx into a powerful supersaturated formula, Sisel has created the world’s first megatonic. Repetitive overfarming and unsustainable agricultural methods, combined with a pursuit to breed crops for greater weight instead of better nutrition, has lead to nutritionally empty fruits and vegetables. Studies have found that compared to the plants of only 50 years ago, what we eat today may have up to 75% fewer nutrients. So while we may believe we’re eating healthy, our bodies may still be lacking the materials they need to function optimally. Perhaps just as alarming is the estimate that there are as many as 100, 000 new man-made chemicals circulating throughout our world, many of which contain harmful free radicals that corrode the cells in our bodies and may increase the effects of aging. So while the nutritional value of the foods we depend on to keep us healthy has decreased, the environmental threats to our health have increased. With literally thousands of different free radicals that can attack us every day, is there a single antioxidant ‘super food’ that can protect us from all of them? Absolutely not. Even truly remarkable foods like resveratrol and fucoidan can’t protect our cells from the variety of environmental threats we encounter. Only a broad spectrum of different antioxidants can do this. SpectraMaxx contains 40 powerful antioxidant fruits, vegetables, and other natural ingredients that each have unique abilities to scavenge different types of free radicals. SpectraMaxx also contains 74 essential trace minerals the body needs to sustain a variety of important biological functions. Scientists have identified as many as 2, 000 different chemical reactions that take place in our bodies that may require minute amounts of elements we usually don’t think about. Low mineral content is one of the most noticeable deficiencies identified in modern foods, making supplementation with trace minerals crucial for normal function of all systems of the body. One of the keys to SpectraMaxx’s effectiveness is fulvic acid, one of the most essential organic substances for all life on Earth. By breaking minerals down into tiny ionic particles, small enough to be absorbed by the roots, fulvic acid enables plants to get the nutrition they need to power important functions like photosynthesis and cellular respiration. Without fulvic acid, most of the edible plants in the world wouldn’t survive, and the entire food chain would collapse. Once naturally occurring in soils everywhere, a deficiency in fulvic acid throughout the world may also be contributing to the low mineral content of food crops. Emerging research has shown that fulvic acid may be just as important for a healthy body as it is for a healthy planet. Not only does it make the trace minerals in SpectraMaxx more readily bioavailable, greatly improving absorption, it may also support healthy function of every system of the body, and is an effective antioxidant in its own right. Evidence of the potentially devastating toll our changing environment has had on our health can be found in the increasing occurrence of cancer. A recent breakthrough study conducted at the University of Manchester examined the preserved remains of hundreds of Egyptian mummies, searching for cancerous tumors. They found only a single case. Comparing this cancer rate of less than one percent to today, when one in every two people in developed nations will be diagnosed with some form of cancer in their lifetime, the researchers came to a staggering conclusion: cancer is man-made. While cancer is the most alarming example of how man’s quest for innovation and progress has had an adverse effect on our health, it is certainly not the only one. But if many of the common illnesses of our time could be man-made, might they also be avoidable? We believe so. 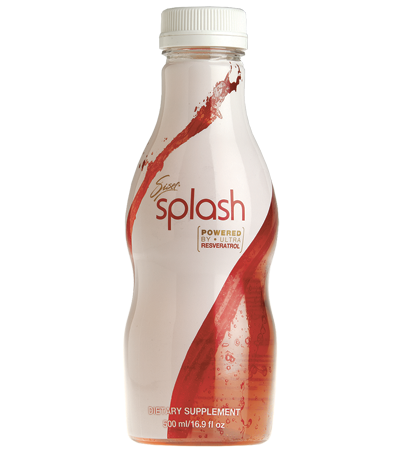 We all know that we need to drink more water, but it can be tough to get the eight glasses or more that we need every day—especially when other beverages like juice and soda are so appealing. Sisel introduces the healthy alternative to soft drinks filled with mountains of sugar or toxic artificial sweeteners. Sisel Splash is a light and refreshing enhanced-water, infused with the power of our advanced resveratrol formula. Not only does Sisel Splash help you hydrate properly, but every 16-ounce bottle contains more resveratrol than an entire bottle of red to give you an added boost of natural vitality. And with high, natural electrolyte content, Sisel Splash is the perfect thing to keep you going when you’re at your most active. Best of all, Sisel Splash does all of this with an incredible flavor and only three grams of carbs. We have balanced the perfect ingredients to give Sisel Splash what could be the perfect flavor. So far everyone who has tasted it has loved the crisp, sweet combination of real pomegranate, natural agave nectar, and pure stevia. 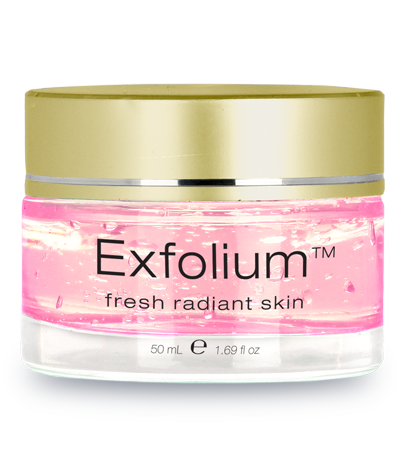 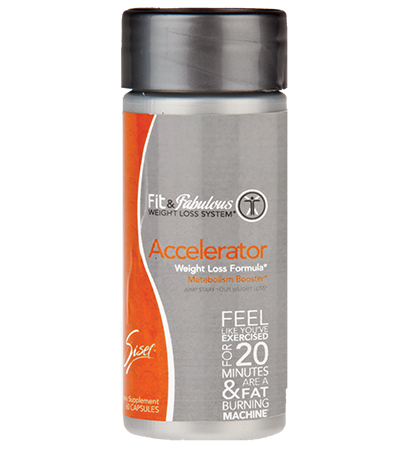 Accelerator contains some of the most proven natural weight loss-supporting ingredients combined in precise amounts that have been determined by Sisel researchers to deliver the greatest synergistic effect possible. In our tradition of "researching the research" we believe we have unlocked the potential of these well-known ingredients further than any other product or formulation ever has before. This blend of powerful ingredients was created to deliver incredible thermogenic support. Thermogenesis, or the creation of heat, is a process concurrent with the burning of calories, and as anyone who has struggled with diet and exercise knows, burning calories is not easy! With Accelerator it can be! Not only do the ingredients in Accelerator work synergistically with each other, but as a formula Accelerator works in concert with our other thermogenic product, ThermoCharge. Because these two formulas are so different, their ingredients function through entirely different mechanisms of action to power up your calorie and fat burning efforts. Accelerator can be the perfect supplement to initially jumpstart your weight loss efforts, and when possible should be among the first of the five products included in Sisel’s Slim & Slender Rapid Weight Loss System that you use. Green Tea Throughout the world, only water is consumed in higher quantities than tea, and few plants have been studied more for their potential health benefits. Green tea has active antioxidant properties and has been shown to have thermogenic effects in humans. In addition, it may suppress fat accumulation. In fact, in a 90-day study, human participants consuming 150 mg of green tea extract lost 14 kg compared to a loss of only 5 kg in the control group. Caffeine This naturally occurring , found in tea, cacao, kola trees and dozens of other plants, is commonly consumed around the world. As a central nervous system stimulant, caffeine my increase resting energy expenditure and promote thermogenisis. In humans, 200 mg of caffeine has been shown to increase metabolic rate by 7% in just three hours. Capsicum Derived from red chili peppers, capsicum is thought to work on the sympathetic nervous system to increase thermogenesis. When combined with green tea, this effect may be sustained for a longer period of time. Capsicum has also been proven, in a laboratory environment, to promote lipid mobilization from adipose tissue. Black Pepper As a bioavailability enhancer, black pepper may assist in the absorption of other ingredients. However, by itself, it has been shown to increase energy expenditure by promoting ATP activity in the mitochondria of cells in the body. It may also support increased pancreatic function in order to enhance digestive capacity. It is also a powerful antioxidant in its own right.