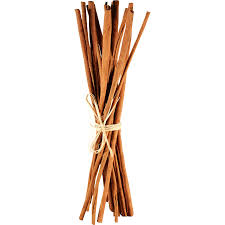 Chinese cinnamon is well-known spice, comes from a type of evergreen tree. Related species are cinnamon cassia and saigon cinnamon. Cinnamon is one of the world’s most important and popular spices. In the united states, chinese cassia is the most common type of cinnamon used.

cinnamon is a warming aromatic tonic that stimulates the digestive system and it is able to help reduce cholesterol and blood sugar levels. Also, it can be used to help treat muscle spasms, the common cold, and loss of appetite. Cinnamon is subtle, smells very mild and slightly sweeter in taste. Although cinnamon smells mild, if add it to baked foods or toast, the aroma it gives off is a fragrant. A lot of people have been using cinnamon to make desserts or foods taste very different. Cinnamon is used in cookery as a condiment and flavoring material, and widely used as an aromatic spice and the preparation of soups, barbecue sauces, and pickling.

cinnamon will keep for a long time if you store them properly. Please keep cinnamon away from heat, moisture, and direct sunlight, and keep in an airtight container or jar.