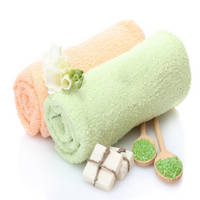 Classification of towels
1. Terry towels - all cotton terry towels are added to the yarn to form a loop when weaving on the loom. It is often referred to as the "ring organization".
2. The cut pile towel - cut pile towel is similar to the terry cloth, loop cut by cut pile put the cloth with soft nap cut the fabric surface nap short at the same time, the villi are a bit shorter than terry cloth like velvet on the surface of the villi.Many consumers love the exquisite sheen of velvet towels.It is easier to absorb moisture by touching the skin on one side of the loop.
3. Printed towel -- a variety of beautiful prints are designed on terry cloth or cut terry cloth.
4. Jacquard towel -- the surface of the towel has a fine three-dimensional feeling that is slightly highlighted on the surface of the fabric and woven into the towel fabric on the jacquard machine.
5. Embroidered towel -- make the bathroom more exquisite and elegant. Some manufacturers apply embroidery or border decoration to towel design.