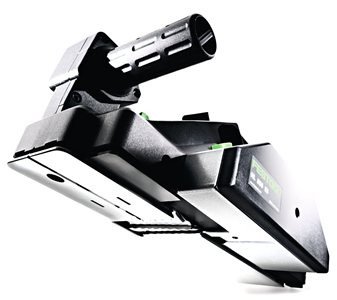 Using an electric planer right up to the edge or on rabbets often produces unsatisfactory results, as the machine leaves a lip that has to be removed by hand•À_•À_•À_unless you have the Festool HL 850 planer. The HL 850 lets you cut flush to an adjacent surface because it can plane across the entire width of the rabbet. Because the planer head is mounted to one side, it sits flush with the opposite side of the planer housing. The retractable side guard makes planing safer, and it swings up and to the side as the rabbet depth increases. Planing up to the edge in deep rabbets is no longer a problem. 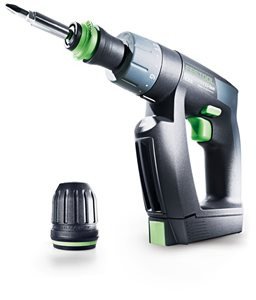 The CXS Compact cordless drill is the latest, and by far the smallest, extension of Festool•À_ó»s Li-Ion drill platform. Featuring the FastFix chuck system, the CXS can be used with the Centrotec chuck, keyless chuck, or an optional right angle attachment that allows you to access even the tightest spaces. As you would expect, the CXS features exceptional ergonomics, with a battery design that removes the bulk from the handle, ensuring maximum comfort over extended use. Weighing in just under 2 pounds with the Centrotec chuck attached, the CXS will not leave you feeling fatigued even after all day use. The CXS offers exceptional battery life and an ultra-low recharge time, fully recharging in just 30 minutes. The drill comes with two 10.8v 1.3Ah Lithium Ion batteries to keep you drilling and driving instead of waiting for a battery to recharge. The drill, charger and both batteries are covered by Festool's comprehensive 3-year warranty.